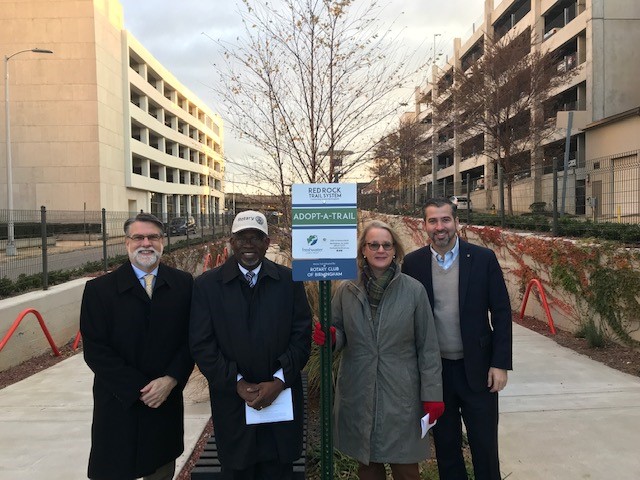 We are excited to announce The Rotary Club of Birmingham has joined our Adopt-a-Trail program! Volunteers will work on Rotary Trail every few months, and twice a year the trail will be maintained by their contracted partner, Blackjack Landscaping.

“The Rotary Club of Birmingham recently signed up through the FLT’s Adopt-A-Trail to adopt The Rotary Trail. This may seem odd at first, since we built the trail. But we know it makes a lot of sense,” said Rotarian Derek Conrad Brown. “We designed, funded, and constructed Rotary Trail to honor our club’s 100th anniversary, in 2013. Then we gave the trail as a gift to the people of Birmingham. We believed this trail could have transformative promise. And it has!”

On their inaugural workday in November, Rotarians removed trash, trimmed runaway vines, swept gravel off the sidewalks, and even had time to clean up a patch of land along the trail’s extension further east. Their next workday date will be in February.

“Rotary’s motto is ‘Service above self’ and we think being a part of the Adopt-a-Trail program is another meaningful way to give back. We hope other groups in the community will join our efforts by adopting other parts of the various beautiful trails in our county,” said Brown.